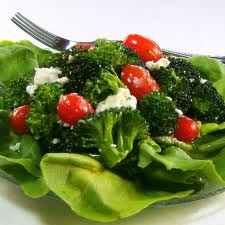 Mom was right after all. Vegetables ARE the elixir for much that ails us, much that our
body needs for health and balance, and much that our body requires to fight off disease and aging. The health benefits of home grown, backyard vegetables just can’t be ignored.

Remember how you stared at your dinner plate as a child, piled high with spinach, broccoli, and more, and wondered why your parents hated you so much? But, like Mark Twain, who once hilariously wrote about how much his father had learned from Twain’s adolescence to his adulthood, our parents were much smarter than we ever gave them credit for at the time. Today, the science is simply overwhelming where the health benefits of vegetables are concerned and each of us must consume a daily regimen of them if we want to maintain peak health and age gracefully.

When you talk about super nutritious vegetables, broccoli is almost in a league of its own. It is low in calories, it’s rich in vitamins and minerals (a cup of cooked broccoli has as much vitamin C as your average orange does, and it’s chock full of vitamins B1, B2, B3, B6, potassium, magnesium, and iron!), it contains needed fiber, and for most, it’s delicious when prepared correctly.

Broccoli is a “cruciferous” vegetable of the family Brassicaceae (also called Cruciferae) and its first cousins in the vegetable world are brussel sprouts, and cabbage, and cauliflower. Sulforophane is a sulfur-containing compound present in cruciferous vegetables, and it may have cancer fighting properties to it. The research is ongoing but is most encouraging.

SPINACH – strong to the finish, cuz he eats his

Were it not for Popeye’s love of spinach, and the super human strength he derived from eating a can of it, many of us would have drawn the line here as kids and refused to eat any. It was never appealing to the eye (then or even now), and it’s flavor makes few do back flips, but the positives of spinach cannot be understated.

Lutein and zeaxanthin are nutrients that healthy eyes depend. They’re both antioxidants that can neutralize free radicals in your body, and spinach is teeming with them. Speculation is that these two substances may protect the eye from light-induced oxidative damage, which is thought to play a role in the development of age-related macular degeneration.  As to other vitamins and minerals, spinach is also a super source of vitamins A and K and a good source of folate. Vitamin K plays an important role in blood clotting.

I’ve left the most popular of vegetables for last. Tomatoes are incredibly popular for backyard gardeners to grow, and they’re a staple of diets the world over. And good thing too because they have many nutritional benefits.

Tomatoes contain a substance called lycopene; a red carotenoid pigment and phytonutrient that is also found in pink grapefruit and watermelon. Lycopene is the ingredient that makes tomatoes red in appearance. Lycopene is a very potent antioxidant, thought to protect against some cancers and even cardiovascular disease. This substance has been found quite promising in protecting men from acquiring prostate cancer. Many medical studies on this topic have been so encouraging that even the FDA has approved a qualified health claim about the relationship between tomatoes and the prevention of prostate cancers. Wow.

The best defense against disease and the inevitable aging process is to eat things that help your body to be healthy, live longer, and fight disease. Fresh backyard vegetables are your weapon! And what better place to acquire them than your own backyard? You can start a backyard garden today, inside a great backyard greenhouse, and cultivate the tastiest, most healthful vegetables around, that are devoid of pesticides and chemically treated soils to insure that only the best stuff is served at your dinner table. Here’s to the good health that several cups of fresh backyard vegetables every day can help us all achieve!

The coronavirus pandemic has set off a global gardening boom. In […]